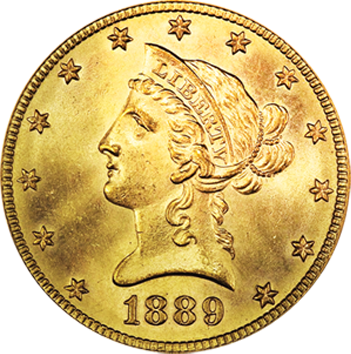 The Liberty Head Double Eagle, an American twenty-dollar gold piece struck as a pattern coin in 1849, and for commerce from 1850 to 1907. The coin was immediately successful; merchants and banks used it in trade. It was struck until replaced by the Saint-Gaudens double eagle in 1907, and many were melted when President Franklin D. Roosevelt confiscated gold coins from the public in 1933. Millions of double eagles were sent overseas in international transactions throughout its run to be melted or placed in bank vaults. Many of the latter have now been repatriated to feed the demand from investors, collectors and those who desire to hold gold. 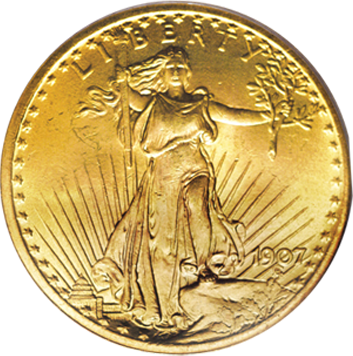 The Saint-Gaudens Double Eagle is a twenty-dollar gold coin produced by the United States Mint from 1907 to 1933. The coin is named after its designer, the sculptor Augustus Saint-Gaudens, who designed the obverse and reverse. It is considered by many to be the most beautiful of U.S. coins. When the coins were finally released, they proved controversial as they lacked the words “In God We Trust”, and Congress intervened to require the motto’s use. The coin was minted, primarily for use in international trade, until 1933. The 1933 double eagle is among the most valuable of U.S. coins, with the sole example currently known to be in private hands selling in 2002 for $7,590,020. 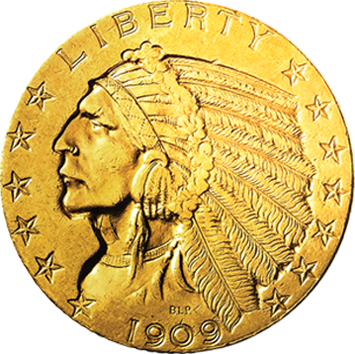 The Indian Head Quarter Eagle design was created by Boston sculptor Bela Lyon Pratt. The coin was a departure from other examples of American coinage because it had no raised edges, instead it featured an “Incuse” design sunk into the planchet. Unfortunately, the public had much distaste for the experimental and unusual design. Many feared that the recessed surfaces would collect germs, and others simply thought it was ugly. Numismatists took little interest in the coin. This resulted in few examples in uncirculated condition and the coin slipped into obscurity for many years. Today, however, collectors adore the exotic design and the coin is recognized as part of the creative renaissance of American coinage. The Indian Head design was produced from 1908 to 1929.